skip to main | skip to sidebar

BLUE SHIFTED GALAXIES
There are more almost 7000 blue-shifted galaxies listed in the NED1 web site. Being blue-shifted means that they are approaching the earth. The velocities ranges from just-above-zero to 8000 km/sec. The vast majority of velocities is less than 200 km/sec.

In Figure 1, the location of a random sample (2000) of these galaxies is shown in relation to the Milky Way (the Galaxy) and the ecliptic About 90% of the blue-shifted galaxies are located in two groups which are located approximately 180º apart.

In Figure 1, you can see that the image of the Milky Way2 passes between the two groups 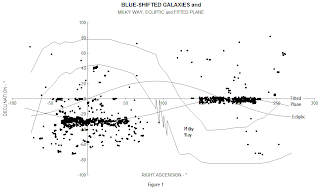 of blue-shifted galaxies. The plane of the Galaxy is at a steep angle of about 60º. In other words, the solar system disk “sticks out” of the Galactic plane in two places around RA 0º (to the south) and RA 180º (to the north). Otherwise, it is pretty much shrouded by the Milky Way.

Its hard to see distant galaxies through the Milky Way disk because its light masks them. Open space is accessible to the solar system where it is trying to “stick out”. The other regions experience significant interference from the Milky Way. 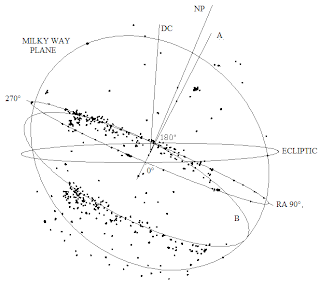 Figure 2
Showing the blue-shifted galaxies (dots), the plane fitted to the principal band (B), and the normal to the band (A).. Right Ascensions are marked on the celestial equator. The point from which the celestial sphere is viewed: (∞, RA 359.83°, Decl 4.62°).

Some other bands (with much smaller number of galaxies) seem to be suggested, also. One coincides with the celestial equator.


CONCLUSION
In the last two year almost 200 blue-shifted galaxies have been added to the NED web site—most likely credit to the Hubble telescope. The pattern that they form in the sky seems to be a useful tool to explore our universe.